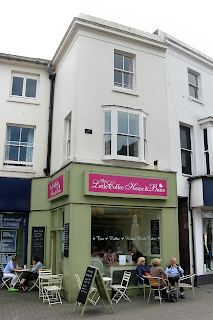 If in need of refreshment in Littlehampton, then The Little Coffee House & Bistro offers not only non-alcoholic beverages but bottles of Lister’s Ale brewed on the premises by Philip Waite, son of the family owners. Philip, a cook and self-taught brewer with an art college and oil trading background, built both the fully-automated plant and bottle-filler. The enterprise dovetailed perfectly with the commercial kitchen outlet and an alcohol license was obtained; Lister’s Brewery was registered last October and has been producing the beer since December.

Philip’s aim was to make the kind of session beer he himself would like to drink. It is a 3.9% triple-hopped best bitter, brewed with pale, brown and black malts and including Challenger and Styrian Goldings hops. The bottles have also been on sale at the China Palace restaurant in neighbouring Arundel and two London outlets: Duke’s Brew & Que, N1 (home of the Beavertown Brewery) and the Jamboree Music Venue. A cask version has appeared at the Snowdrop Inn, Lewes.

Philip will soon be rebuilding his 0.25bbl plant to double its capacity and has plans to eventually move off-site into a bigger brewery to supply more pubs within the local area. He is thinking about next brewing a golden ale. And if you haven’t already guessed from the bottle label, Lister was the family terrier, now alas departed to the great kennel in the sky but immortalised in image for what has become this Sussex seaside town’s second brewery.