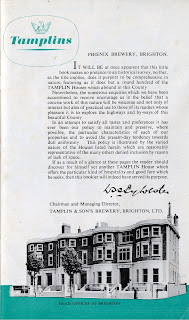 Within one hour on 6th September 1820, the thatched-roofed Southwick Brewery, at that eponymous Sussex town, was consumed by flames. Owner, Richard Tamplin had only purchased the brewery from Nathaniel Hall earlier that same year and was uninsured for the loss of over £10,000. Yet within five months of this setback, Henry Padgen Tamplin, Richard’s eldest son had laid the foundation stone for the family’s new brewery behind the company’s registered office at Richmond Terrace, Brighton. Both this elegant terrace and the brewery were designed by father and son team, Amon and Amon Henry Wilds, architects responsible for some of the town’s finest Regency buildings.

Because this new venture had risen from the ashes of the old, albeit at a different place five miles to the east, the site at Albion Street and Waterloo Street site was called the Phoenix Brewery. It was to become not only Brighton’s biggest brewery but the largest in Sussex with an estate of some 600 pubs, stretching into Hampshire, Kent and Surrey. The biggest concentration, about a third, was in the Brighton area, which meant that by the early 1950s two out of every three pubs in and around the town were owned by Tamplins. 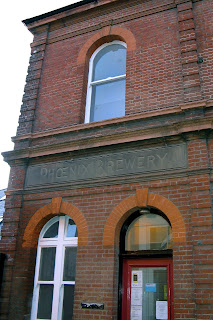 Richard Tamplin was born into a family of mercers on 14th January 1779 at Horsted Keynes to the north of the county. He moved to Brighton in 1811 and was reported to have set up a bank in Castle Square. Richard also brewed and held licensed premises at Worthing both before and subsequent to finding a permanent site at Brighton. Upon Richard’s death in September 1849 the brewery passed to Henry, born in 1801 and died on 16th December 1867 after a hunt meeting. It was Colonel William Cloves Tamplin (b. 1834), son of Henry and already a partner in the business at the time of his father’s death, who in May 1889 registered as a limited liability company Tamplin & Son’s Brewery, Brighton, Ltd, with its 83 hotels, licensed houses and beer houses at a purchase price of £265,000.
When the Colonel died of a heart attack on 26th July 1893 it was the end of the family name on the board of directors; but what was to become a policy of acquisitions had begun the previous March with the takeover of Marcellus P. Castle’s close-by Albion Brewery, Albion Street, with 35 houses. In 1899, 21 licensed houses were purchased from the West Street Brewery, Brighton. A year later the South Malling Steam Brewery, Lewes, with two houses was purchased from M. H. Bishop & Sons, and the Brighton Brewery, Osborne Street, Hove, with 12 houses was purchased from Richard Carey Weekes.

By 1902 the Phoenix Brewery site covered an area of 100,000 square feet with a workforce of 150 men; but its largest acquisitions were to come in the 1920s. At the start of that decade the Southdown & East Grinstead Breweries Ltd. leased its business with 93 houses to Tamplins with an outright purchase following on 27th March 1924. Two years later it was the turn of Kidd & Hotblack, Cannon Brewery, Russell Street, Brighton, with 52 licensed premises. 1928 saw Tamplins acquire two-thirds of the pubs of E. Robins, Anchor Brewery, Waterloo Street, Hove, and the following year 125 houses of Smithers & Sons Ltd. of Brighton and Portslade. 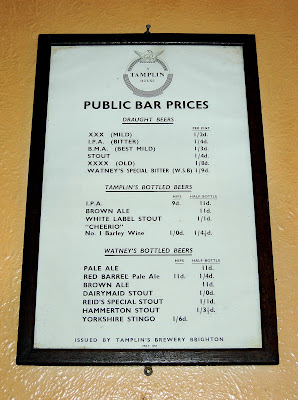 For the following twenty-five years the Brighton pub scene was subject to a duopoly of Tamplins and its local rival the Kemp Town Brewery. In 1955, Tamplins and Friary Holroyd Healey of Guildford famously divided between them the entire estate of Henty & Constable of Chichester, with the pubs ranked according to barrelage and the first pick decided by the cutting of a pack of cards. But two years previously Tamplins had themselves been acquired by the London brewers Watney, Combe, Reid and Co. Ltd. Although allowed to continue to trade as Tamplins until 1969, the writing was on the wall.
By the time a minor name change to the Tamplins Brewery Ltd was registered on 13th February 1962, the infamous Watneys Red Barrel, brewed at Mortlake, London, was being kegged at Brighton.

As the reformed Watney Mann (London & Home Counties), the last brew took place at the Phoenix Brewery on 28th November 1973. But this was not the end of the Tamplins name. When a few years later Watneys - themselves the brewing arm of leisure group Grand Metropolitan - revived real ale, their portfolio included a 1038° Tamplins Bitter, described in the 1982 Good Beer Guide as a “well-balanced brew”. 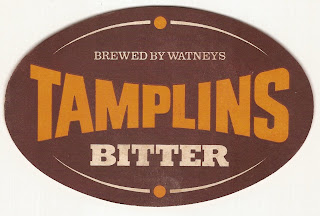 It was produced in East Anglia at the Norwich Brewery, but marketed for the south coast at the Phoenix Brewery, which in 1976 had become the subsidiary Watneys Southern Ltd. By 1982 the operation at Richmond Terrace was renamed the Phoenix Brewery Co Ltd, although the brewery building itself had been demolished some two years previously. As a non-brewing company, Phoenix controlled 400-500 pubs on the south coast, the large majority serving real ale from such independents as Gale’s and King & Barnes; but Tamplins Bitter was withdrawn in early 1986 following the closure of the Norwich Brewery the previous year. A metal phoenix rising with flame tipped wings can still be seen atop the standing signs of numerous pubs in Sussex that used to be under the control of this company, while the phoenix image on pub lanterns is an even more common survivor. 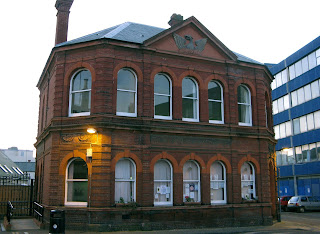 The Brighton premises were retained as a bottling plant and depot until a move to Lewes in 1991. The old Head Offices building at Richmond Terrace remains today as elegant as ever, while still standing in Phoenix Place is the redbrick office building with slate roof and phoenix pediment, designed by C. H. Buckman and completed in 1893. 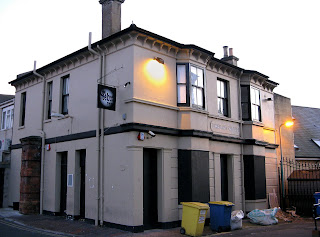 Behind this is the Free Butt, the old brewery-tap, looking forlorn and no longer a pub but with Tamplin’s Entire on the stonework tablet over the front door. Just to the rear left of the Free Butt once stood the iron gates on stone pillars that marked the entrance to the Phoenix Brewery. New housing now covers most of the site. The Tamplins name with its phoenix trademark can still be found etched into the glass of pub windows, survivors of several decades, or on old prices lists displayed as memorabilia on walls. And even where the name itself does not appear, the motif of birds engraved into old window glass often denotes that such a pub was once part of the vast estate of Brighton’s biggest brewer.