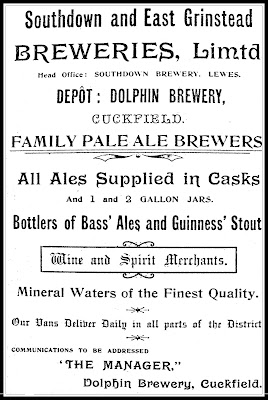 I reported in my previous post about a Harvey and Son’s recreation of a recipe from Southdown and East Grinstead Breweries. This company, Southdown and East Grinstead Breweries Ltd. (henceforth SEG) was formed in 1895 by the merger of Dashwood & Co, Hope Brewery, East Grinstead with A. G. S and T. S. Manning, Southdown Brewery, Lewes.
The Hope Brewery, London Road, East Grinstead, was so named after a possible rebuilding during the period (c. 1839-1844) of the partnership of Burt & Hooker, although brewing on the site may have dated back to 1762. Subsequent owners were Edward Kenward, followed by Charles Absalom then, from 1877, John Dashwood. The Southdown Brewery, Thomas Street, in the Cliffe area of Lewes, was established by 1838 and acquired in 1895 by Augustus and Thomas Manning. In July of the same year they acquired Dashwood’s East Grinstead enterprise and registered the new, joint name, accurately conveying the fact that brewing continued on both sites. 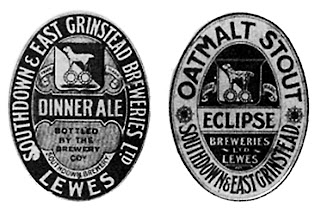 The process of acquisitions did not cease there. In 1898 SEG gained a listing on the Stock Exchange and acquired Joseph Langton’s Dolphin Brewery, Cuckfield, with eight houses, and nearby rival Edward Monk’s Bear Brewery, Bear Yard, Lewes, with fifty-three houses. In 1907 SEG acquired the Station and New Road breweries of George Ockenden & Son, Crawley. But the early 20th century had seen SEG in commercial contraction and in 1920 it leased both its breweries and all ninety-three houses to Tamplin & Sons of Brighton, who purchased them outright four years later for £274, 000. 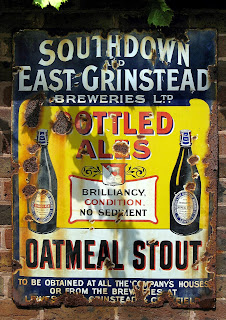 From the old label images and the tin advert (at the Horns Lodge pub, South Chailey, East Sussex), we know that SEG bottled bright a Dinner Ale, an Oatmeal Stout and another beer called Eclipse. The larger advertisement was obtained from the Cuckfield museum.

Holter, Graham (2001) Sussex Breweries, Seaford: S B Publications.
Posted by The Quaffer at 08:59